The North High JROTC shooting team competed at the Freeport Invitational shooting tournament this past weekend in Freeport, Illinois.  North competed against 15 other teams from around the region and chalked up its 1st victory of the new season.  North out shot Zion Benton, Ill 2157-2108 to take the top spot for the 3rd straight year.  Leading the team was Ayden Wells who shot a 546 and finished as the meet runner-up, followed by Arturo Zaragoza and Cecelia Zaragoza.  North finished the individual competition by taking 3 of the top 4 spots.  The team begins the qualifying process the next 2 months for the Marine Corps Championships in Alabama, JROTC Championships in Ohio and the CMP Nationals in  Utah. – GySgt Mike Gettler, Marine Instructor & Rifle Team Coach 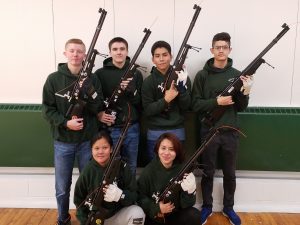